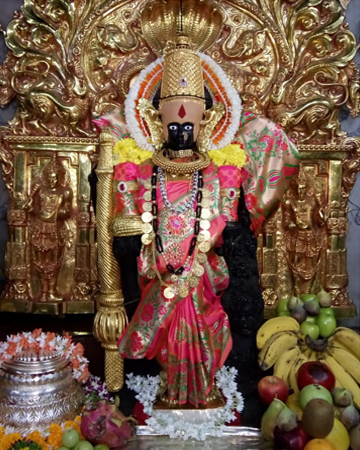 Ornamental pooja is performed at 01.30 pm every day
Visit previous pooja
Mythology History Nature Today
According to the Hindu mythology; there are five major ways through which gods are worshiped. They are
1) Shakta 2) Shaiva 3) Soura 4) Vaishnav & 5) Ganpatya
Every way has its own supreme god. And they have a concrete belief that their god invented this nature.
1. Shaktas worship god Shakti
2. Shaivas worship god Shiva
3. Souras worship god Sun
4. Vaishnavas worship god Vishnu &
5. Ganpatyas worship god Ganesha.
Among these five gods, one being worshiped by Shaktas since ages is shakti.Shakti means goddess Mahalaxmi. In & around Kolhapur goddess Mahalaxmi is known as Ambabai.
According to Yoga shastra, human body contains the universe in it & is made of seven chakras. The ‘Muladhar Chakra’ has its goddess Mahalaxmi.
The evidences of the greatness of the goddess can be found in famous mythological writings such as the Karveermahatmya, Devimahatmya, Vishnu Puran, Kedarvijay etc. If we try to discover the evidences mentioned in these famous writings, the destinations can still be found with same or another names. One thing is true, everything desires a sincere discovery and the world of miracles will be explored. Read more...
Ambabai (Mahalaxmi) temple has a rich & glorious history. The construction begun before 12th century & existing temple was built during late 12th century. The maximum construction of this temple is been built by Shilahar King during 12th century.
The architecture of the temple is purely Chalukyan & not Dravidian.
The Sanskrit inscription on a stone tablet in the wall of the house of Annacharya Panditrao, now in the town hall museum says,“The great Kind Bhojadeva was reigning peacefully with pleasing conversation at Panhala; in 1190. He with a view to ensure the prosperity of his kingdom, and for the maintenance of the people residing in the monastery built by his dependent Loka-nayaka, for performing five kinds of worships of the deities Amruteshwara & Uma-Maheshwara, for offering to the goddess Mahalaxmi three times a day. And for the maintenance of his dependant Brahmins, and for the repairs of the monastery, granted in charity to four persons residing at the monastery.”
The Sanskrit inscription on a pillar in the temple of Ganpati to the west of Shri Ambabai temple is dated 1218 A. D. It belongs to the reign of king Tailama of the Devagiri Yadava dynasty. In it he is said to have pleased Mahalaxmi by many presents of jewellery.
After the Stone Age begins the paper age; wherein characters from 18 th century onwards are issued on paper and are preserved to the present age.
With reference to these documents; we can imagine the time lines of Ambabai (Mahalaxmi) temple. Read more... 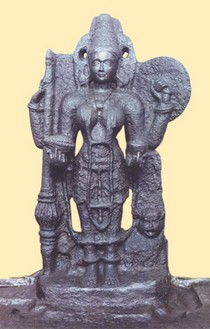 Almost all sects in the world consider the supreme Goddess as their mother. The reason is her form and her name. As grandson of saint Eknath Shri. Mukteshwar said,
तारा अगम्य शाक्ता |
शिवभजका गौरी सांख्यासी प्रकृती |
निर्गुण निजधारी गायत्री निजबीज |
निगमागम सारी प्रकटे |
पद्मावती श्री जिनधर्मचारी |
Meaning Skata sect call her Tara, devotees of Lord Shankara call her Gauri, followers of Sankhya philosophy (tatvadnyan) call her Prakruti, students of Veda call her Gayatri and Jain followers call her Padmavati.
Though we all know that saint Eknath Maharaj is a great devotee of Vithoba (Lord Vishnu); his grandson Mukteshwar also had strong belief that she is Laxmi; the concern of Lord Vishnu. But it is notable that he never hesitated about what all other sects think about her. Read more...
Today, goddess Mahalaxmi is an epicenter of overall development of Kolhapur and its vicinity. Worshiped by crores of devotees all over the world; huge number of devotees visit Kolhapur to sincerely worship the goddess. It has supported the tourism industry in and around Kolhapur district. For that matter, transportation, lodging, boarding and all other related businesses are being benefited.
Located on Mumbai-Chennai; previously a Pune-Bangalore highway Kolhapur nests amazing tourism destinations such as forts, temples, forests, heritage structures & historical monuments. Any tourist intending to visit here may have numerous opportunities of diverse tourism. Guests are heartily welcomed and served here.
Well connected by road, rail and airways to the rest of the world; developing infrastructure is one more prominent draft on the blue print of Kolhapur. Being a gateway of Konkan, most of the tourists travelling to Konkan goes ahead by visiting Kolhapur. And all other assets such as food and tourism destinations are capable of holding them in and around Kolhapur to linger for more time. Along with specialty local veg and non veg cuisine, multi cuisine restaurants with all economic types of more than 3000 rooms are available in Kolhapur. Well planned and affordable touring facilities adds more assets to the hospitality industry of Kolhapur. Along with religious and industrial tourism, Kolhapur is coming up with all types of medical tourism. Read more... 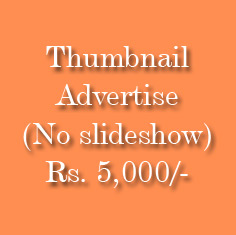 Its now time for you to get blessed
Ambabai; goddess Mahalaxmi of Kolhapur. The goddess of health, wealth, peace & prosperity. We are happy to relaunch one of the most successful website of goddess Mahalaxmi (Ambabai); goddess mahalaxmi of Kolhapur. The credit goes to every visitor whose visit encouraged us to add more & more information. We'll be happy to introduce very authentic information with refrance to ancient manuscripts, traditional writings & numerous religious books etc. Keep visiting, keep forwarding the domain & get blessed. Let everybody know the greatness of goddess Ambabai.
Being an ardent lover of Kolhapur; we strongly believe… rather it has been proven that the overall development of this region revolves around Mahalaxmi (Ambabai) temple. As Mahalaxmi (Ambabai) is the supreme power, and Kolhapur is a religious place of great importance; it has been progressing as time changes. Thousannds of devotees visit Kolhapur and for that matter this all region regularly. The number is increasing day by day. Those who are curious about goddess Mahalaxmi (Ambabai) and Kolhapur as well, this website is an initiative to guide you. Along with it, overall tourism in and around Kolhapur will be published here.
Back to content